Do you want to know the food product from Poland I miss the most? Polish style farmer’s cheese. During my childhood this was my favorite food and it was relatively easy to get, unlike most other food products. During the 80s most of food items were rationed per person. However this cheese was never rationed.
I would walk into the often times bare market and get the whiff of that unique sour smell the cheese produced, especially strong when there was no A/C. I would walk to the counter and look at the angry lady who would be glaring at me for no reason or the opposite spectrum of pretending I didn’t exist. To her left would be the cheese on a big tray, wrapped in wax paper, often flies swirling around trying to get “free samples”. The woman would look down from her counter and say in Polish “What do you want?”. She personified misery of the 80’s communism. I would ask for one brick, which was a pound. I swear the ladies would think I just slapped their children in front of them. They would begrudgingly ring me up. I didn’t need my ration coupon because this wasn’t rationed.

The cheese was produced locally so it was very fresh. Every city in Poland had their own dairy coop  that produced its own brand of this type of cheese. My favorite was from the Sierpc. Today, things are done a little differently. Large corporations produce the cheese now, and they ship it away in the sanitary, vacuumed-sealed packaging. 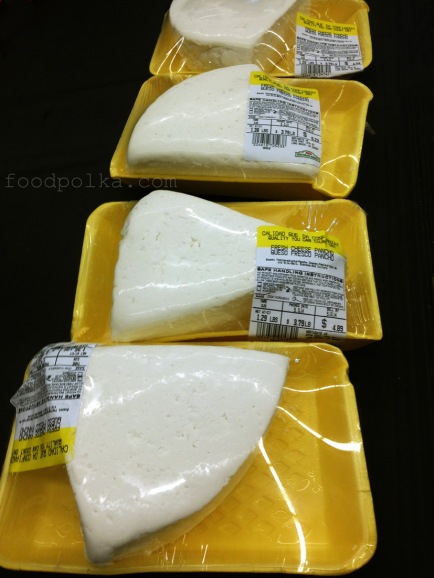 There hasn’t been a massive Polish immigration to California, like other states, so unfortunately good, Polish cottage cheese is very hard to find here. That’s why I love Mexican markets. I might have made you scratch your head with that statement. Polish Cottage cheese is similar to Mexican Panela Cheese. The Mexican cheese is a little drier and sweeter than Polish cottage cheese, but is very similar in every other respect. I use it for Polish dishes and you could hardly tell. Although I would love to be able to buy the real thing once in a while, I would even put up with the angry lady who sold it and stare once again into a past that was happily forgotten.

I am not sure if you know this, but you can make farmers cheese at home. In Poland we would make it from milk that naturally curdles (goes sour before is being boiled) and I think this is the twist that gives Polish farmer’s cheese that distinctive, acidic taste.
Most people in US make cheese from regular milk with vinegar or lemon juice. I am going to give you my aunt’s recipe as well as the one that is being practiced by Americans. Try both of them and compare the difference in flavor.

This site uses Akismet to reduce spam. Learn how your comment data is processed.

Search or Cook it Up